This product is discontinued and now only available through private collector channels.

The reputation-making one-man levitation that can be performed ANYWHERE! Perform it in a living room, on a large theater stage, or in broad daylight on the street. The Thing can float in any performing situation with your audience viewing from any angle. No matter how close the spectators are, whether they’re behind, on top or underneath you, they will not see how this

THING works! Practical, one-man levitations are few and far between. After a decade and a half of research and development in front of real audiences, Bill is re-releasing the routine Genii magazine has called, “The most practical, portable, self-contained, angle proof levitation effect ever.”

Routine Description
You show a box made of clear plastic completely empty. The box lid is opened and an empty cloth handkerchief is draped over the open box. Mysteriously a form rises slowly up from out of the box under the cloth continuing up until it is hovering suspended in mid-air.

The audience can have a clear view of the levitation from any angle and can see is no support of any kind. You then lift a corner of the cloth up and over the levitating object only to have it suddenly disappear leaving the cloth hanging empty in your fingers!

By draping the cloth over the invisible object it slowly makes its reappearance in an unbelievably magical fashion. The object can then float up and out of your fingers, shoot on a horizontal plane away from you or out above the heads of the audience. Finally you push the cloth-covered object back down into the box, dramatically close the lid and bow to thunderous applause!

No threads
No magnets
No assistants
No reset, perform it over and over again without any lighting or staging considerations to worry about.
The Thing Platinum Edition Package Includes:
Hand-Made Gimmicked and Ungimmicked Cloths The New Platinum Edition Thing gimmick is hand-sewn, assembled and each one is personally inspected by creator Bill Abbott. The new light weight components and imported microfiber material make performing this mind-blowing levitation almost effortless and completely deceptive.

Solid Clear View Box
The solid clear view box is made of a lightweight, high impact clear lucite and metal framing, manufactured for a lifetime of use.

The Pocket Thing
Bill Abbott has included a portable box and an all-new handling so you’ll be armed with everything you need to perform this angle-proof levitation directly under the noses of your audiences. The new handling enables you to place an clear foldable acrylic box on the open palm of a spectator and have the Thing rise up literally inches from the assisting volunteer.

Walk-around at a party, table to table at a restaurant or out in the open on the street, The Pocket Thing is ready for any environment.

Intensive Routine Training
Bill Abbott conducts an intensive training session unlike any other, to accomplish one goal – for you to perfect the routine! Whether you perform The Thing on stage or up close, the training sequences have been designed to straighten the learning curve so you can perform the world’s most practical levitation with confidence and to perfection.

The Wildbaum Sessions
Cirque Du Soleil artist Paul Wildbaum takes The Thing in new directions in studio sessions that cover the illusion of emptiness, body isolation, point fix, resistance, breathing, stage movement, character development and motivation. The Wildbaum Sessions will provide you with the tools you need to take your routine to the next level.

The Conversation
Sit down with the creator Bill Abbott and Paul Wildbaum for an in-depth examination of how The Thing came to be and the history of it’s development.

Also revealed are the reasons for the new Platinum Edition, why simple is not always easy, originality, personality, live performance, improvisation, imitation and repetition, natural acting, character, back story, inner monologue, emotional segues and the real secrets of how to connect with any audience.

Music Themes On CD
The Thing Platinum Edition package features a compact disc with 14 music themes, so you can choose the right vibe for your show. Each theme has been carefully constructed and composed specifically for The Thing and is royalty-free so you can use it in any public or private space, on the web and on T.V.

The Poster
Included with The Thing Platinum Edition is a glossy double-sided poster with the main routine in photographic sequence on one side taking you step-by-step through the entire performance and on the flip-side is The Pocket Thing handling. Just adhere it to a wall or your practice mirror and begin. 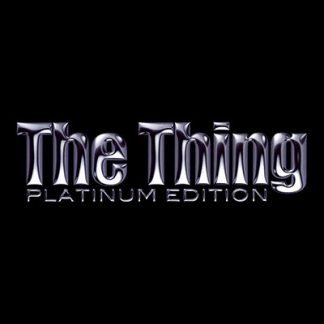 You're viewing: The Thing Platinum Edition by Bill Abbott $249.00
Add to cart