The Solution by Atlas Brookings

what if you could memorize the position of every card in a deck in a matter of minutes — and then recall that deck order for the rest of your life? This ability adds a versatility to your card repertoire that is WORTH having.

Don’t think you can do it?

How is this possible? Why does this work?

Memorized decks typically take a number of forms, and (unsurprisingly) each has some sort of compromise. A deck that requires you to memorize it through brute force takes an awful lot of time to master. A deck formed from a set of rules or a formula typically can’t be freely handled or displayed as the cards don’t look mixed. Systems that allow the use of memory pegs are also difficult to learn as you often have to learn the peg system as well.In an ideal world, there wouldn’t be any compromise — you’d be able to quickly memorize a deck that could also be freely displayed and handled by a participant. You’d have your cake and eat it too.

This is now possible with The Solution.

The Solution is the deck that Atlas Brookings referenced during his Penguin Live Lecture – a deck that you can memorize in minutes and openly fan and display.

The book – running to 120 pages – not only outlines the system, but also comes with several routines that have been created specifically for someone who wants to perform as a mind reader.

Try it! This should be The Solution for you! 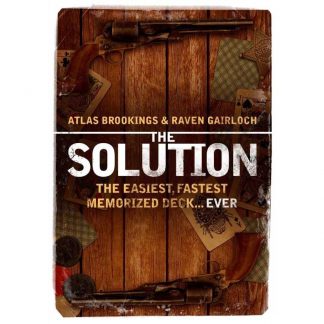 You're viewing: The Solution by Atlas Brookings $39.95
Add to cart