This is an open box or “previously loved magic item”.  These are store demo’s or items bought at auction.  Open box items are complete, gently used, and depending on age and package condition are often discounted

A hat or other container is placed on your table.
A solid wooden die is introduced, also a handsome box having two compartments and four doors.
These four doors are opened and with the audience looking in the front, the die is placed within the box.

With the four doors open, the audience is given a view of the die inside the box.
The doors are closed.

The magician now commands the die to leave the box, opening first one side, then the other, showing the box to be empty(?).
The audience hears the die slide from one compartment to the other.
After the usual by-play the magician shows the die has vanished and appeared back in the hat or container. 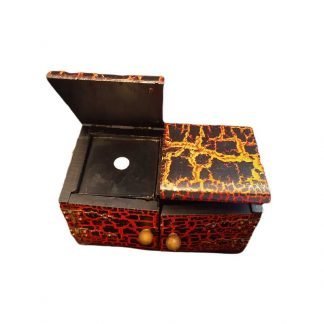