View cart “Smashed by Jay Sankey” has been added to your cart.

This two-disc DVD set is jam-packed with the very best of Caleb’s original material: both a “greatest hits” and a healthy helping of new and unpublished magic. Every single trick is a knockout. This is hard-hitting magic that you will use!

You’ll learn Caleb’s definitive, updated handling for his seminal “Reswindled” effect. The original routine is used by professionals worldwide. This new version adds a visual climax that makes it even better! Then there is the whimsical “All Signs Point to Yes” in which drawings on a playing card come to life to divine a selection…You will learn “Armchair Mindreading,” a mentalism-style card effect that will stun even the most knowledgeable magicians … and much more.

Travelers for Jack – For the first time, Caleb explains the highlight of his close-up show. This is one everybody will be talking about!
Reswindled 2.0 – A visual update to Caleb’s acclaimed Reset routine.
iDeck – A geeky card trick with a fun, commercial presentation and a kicker ending!
Replicator – A topical presentation for Hamman’s Signed Card effect with some outside interference from an odd-backed card.
Make a Wish… Again – A practical, birthday-themed card effect that is easy enough for the relative beginner but strong enough for the working pro.
Clue – An easy-to-do effect using a fascinating and rarely-seen card magic principle. Watch out for the curveball at the end!
All Signs Point to Yes – A playful premise for a visual routine that leaves the spectator with a wonderful souvenir. Joshua Jay calls this a “blockbuster practical effect.”
Semi-Automatic Luck Test – Your tag team partner shuffles the deck, then defies the odds by producing the Kings… AND the Aces!
Cross-Eyed Triumph – An explosive production of a named four-of-a-kind… and that’s only the beginning!
Armchair Mind Reading – This simple effect has fooled some of the best card guys in the world. It looks like real mind reading… and it’s completely self-working!
Lucky Shuffle – An always-ready-to-go closer where the method is as awesome as the effect. They’ll call you the Match-o Man after this one!
Elimin-ACE-ion – An over-the-top rope elimin-ACE-ion match mixing magic and mentalism.
Here-A-Move, There-A-Move, Everywhere-A-Move-Move – A finger-flinging eye-popper using four ungaffed Aces. Plus, Caleb teaches Elevation, a fantastic trick from Joshua Jay!
Paparazzi Pack – A self-working showpiece with run-ins from a huge cast of characters.
Little Fella Grows Up – A false dealing demonstration that does not require any false deals. Just call it the Royal Rumble Flush!


BONUS: Moves – As a bonus, Caleb teaches a host of moves, including his fantastically versatile false cut/control. Say goodbye to the double undercut forever. 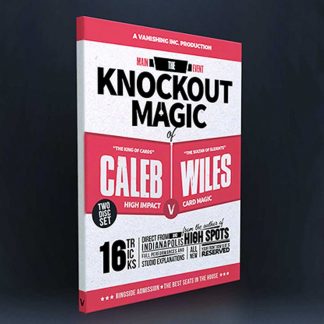 You're viewing: Knockout Magic by Caleb Wiles $40.00
Add to cart