This DVD contains the wickedly deceptive false shuffles and cuts that Karl Hein uses throughout his professional performances. V1 includes 10 false shuffles & cuts, varying in degree of difficulty from beginner to advanced. All video has detailed and easy to follow instructions with close-up multi-angle views of the moves and finger positions. All of these false shuffles and cuts can be done in the hands without the need of a table. You will learn how to do false dovetail shuffles with a bridge, overhand shuffles, one-handed shuffles and flourish cuts.

1. Heinous Shuffle – Simulates a dovetail shuffle with a bridge that is ideal for strolling environments.

2. Heinstein Shuffle – Considered by many top card magicians to be the best and only in the hands false shuffle that you need.

6. Transformer Cut – A five packet flourish cut that has many applications and really looks like it mixes up the packets.

7. Swing Kids Cut & Production – A fast flourish cut with a flashy production and spin out.

8. Equilateral Cut & Production – A unique flourish cut with a design and an instant flash production of a selected card.

10. Charlier Shuffle – A sloppy version of a classic way of falsely mixing cards in a very casual but extremely convincing way. 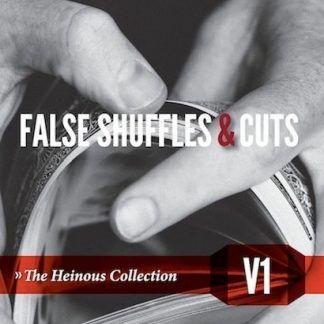